On the afternoon of August 6, 2012, a thick black plume grew over Richmond, California, 10 miles northeast of San Francisco. As the air thickened with smoke, residents instinctively knew the source: the Chevron oil refinery that had towered over the working-class community for decades.

In the following days, 15,000 people in the area sought medical treatment for respiratory problems. Residents later learned that a corroded pipe had leaked and exploded, triggering one of the worst refinery disasters in living memory. Chevron, which resumed full operations the following year, was eventually fined $2 million for the incident and pleaded no contest to six criminal charges, including failing to “correct deficiencies” in the equipment. The company later paid the city $5 million to settle a lawsuit stemming from the fire. (When reached for comment, a Chevron spokesperson wrote in part: “Since 2012, we have taken a wide range of actions to continuously improve our process safety performance. They added: “Our workforce of 3,000 people takes their role as good neighbors seriously. and we are constantly working to ensure a safe operation and environmental protection.”)

Richmond residents have experienced previous refinery explosions, and years of pollution have taken their toll: Asthma prevalence in most black, Hispanic and Asian cities is nearly twice the national average. However, the fire sparked a new and lasting wave of environmental activism.

“I think the 2012 fire played a big role in creating a generation of young people who are angry and look at the status quo and say, ‘Enough is enough,'” said Alfredo Angulo, who was 12 at the time of the fire.

Progressives hold the majority of seats on the city council and have taken on polluting industries, banned coal exports from the Port of Richmond and sued fossil fuel companies for their role in climate change.

Ten years after the disaster, Nexus Media News spoke with four Richmond community organizers about the city’s history, their memories of the disaster and their visions for a post-Chevron Richmond.

“We’ve always been a company town.

Robin Lopez, PhD candidate at UC-Berkeley, 33: Richmond is a vibrant community of people from all walks of life, many of whom seek refuge here from other countries. We have a large Latino population and many Southeast Asians as well. Unfortunately, Richmond has seen a huge exodus of our black community members. These are very vulnerable populations.

Alfredo Angulo, Richmond Listening Project, 22: We’ve always been a company town—Richmond wasn’t even founded until after the Chevron refinery came in 1902. We’re the center of industry, not just Chevron. The Pullman Railway Company formerly had shops here; the Santa Fe Railroad had a home here. Uranus was [handled] here during WWII.

Due to the legacy of redlining and residential segregation, black and brown communities face much of the burden of the industry that made Richmond what it is today.

Katherine Ramos, Richmond Our Power Coalition, 42: At least once a month, a loud alarm goes off that can be heard everywhere. It makes us feel like something is going to drop on us like a bomb. That’s Chevron’s alarm drill. It sends our nervous system into this wild state; like they’re letting us know we are still here.

López: I just finished working at Lawrence Berkeley National Laboratory. I remember taking BART [Bay Area Rapid Transit] home and see a cloud of dark smoke over our house. My mom comes out, she looks up and we’re like what’s happening? And we turn on the news and we start to see and hear things coming in. 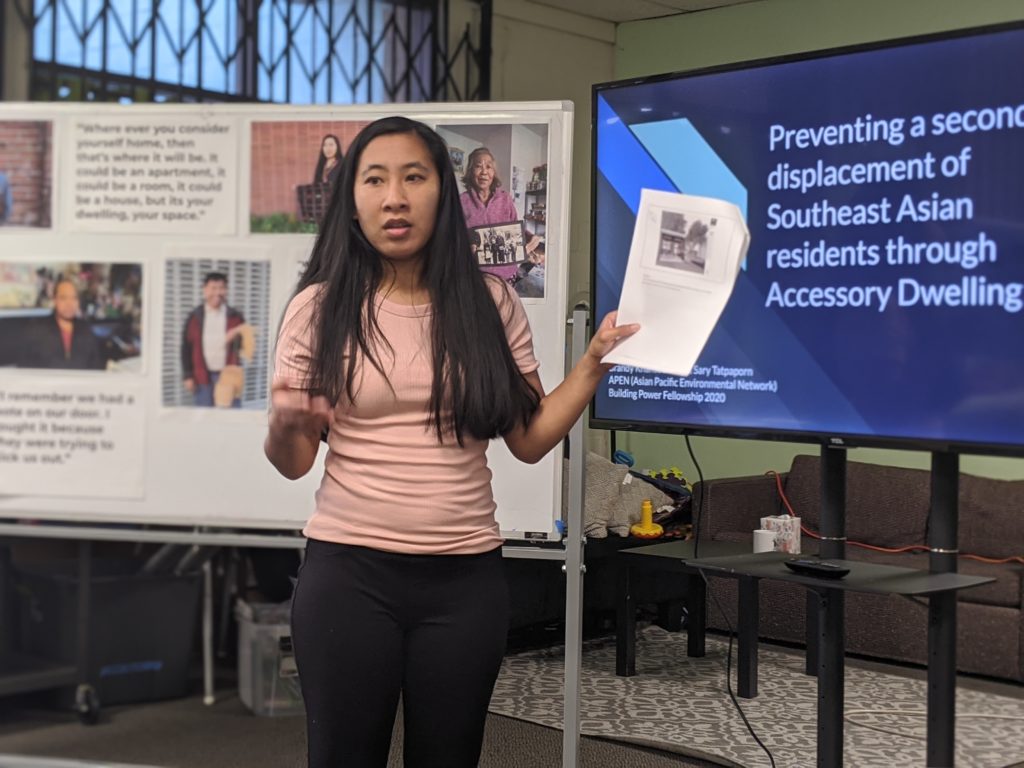 Brandy Khansouvong, Asian Pacific Environmental Network, 29: My mom and aunt don’t speak much English — their first language is Lao. So it was difficult for me to explain to them what was going on. I told mom to close all the windows because the Chevron was on fire.

Angle: I remember walking into my kitchen, the window of which faces the refinery, and seeing a huge cloud of black smoke covering everything. It was apocalyptic, seeing the whole sky go black and seeing the neighbors outside trying to figure out what was going on.

On the public health impact of the disaster:

Khan Souvong: My aunt had to seek medical attention because she has heart disease and asthma. She ended up in the hospital for eight days I think.

The Richmond Our Power Coalition—a coalition of nine service organizations that are moving us away from fossil fuels and decommissioning the Chevron refinery—came out of that explosion. A lot of the community came together and felt poisoned after 120 years of harm. 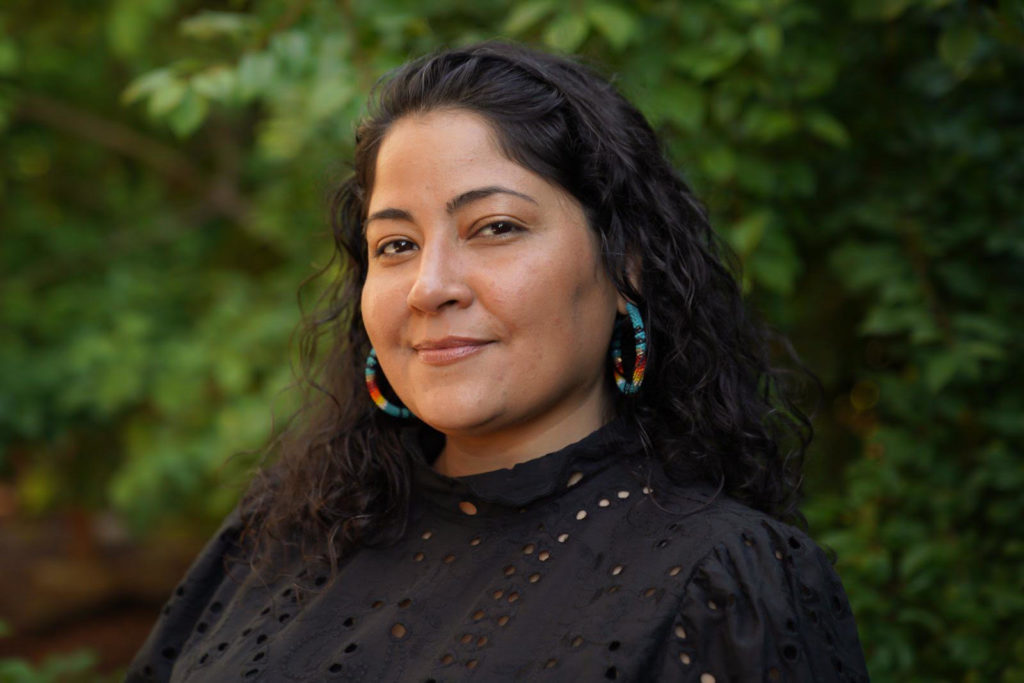 Angle: It’s hard to tell what’s a direct result of the 2012 fire and what’s a result of just growing up here. One in four children growing up in Richmond will develop asthma at some point in their lives. My sister and I have had asthma our whole lives. I can’t even count how many hours I spent in the hospital with asthma complications as a child.

Khan Souvong: My parents came to Richmond to escape the war in Laos. They wanted to find a safe place to raise their children, to live a better life.

When my mom first came here, they didn’t know there was a big oil refinery in our backyard. They found out because there was an explosion at the Chevron refinery in the 1990s – I must have been a kid at the time. After the explosion, my father developed asthma and several of my uncles developed respiratory problems. My aunt also has asthma and heart disease. Sometimes she says the air makes her unable to breathe and it hurts her heart.

Several people in my family have breathing problems. The older people in my family, my mom and aunt, can’t breathe and are sick all the time. They depend on me to take care of them and take them to doctors. Now I have a 7 and a half year old son. He’s at summer school near the refinery and I’m afraid he’s breathing that air.

López: There was even a study by a team from UC Berkeley that showed that pollution from Chevron also affects the indoor air quality of these residents’ homes. There is no escape. 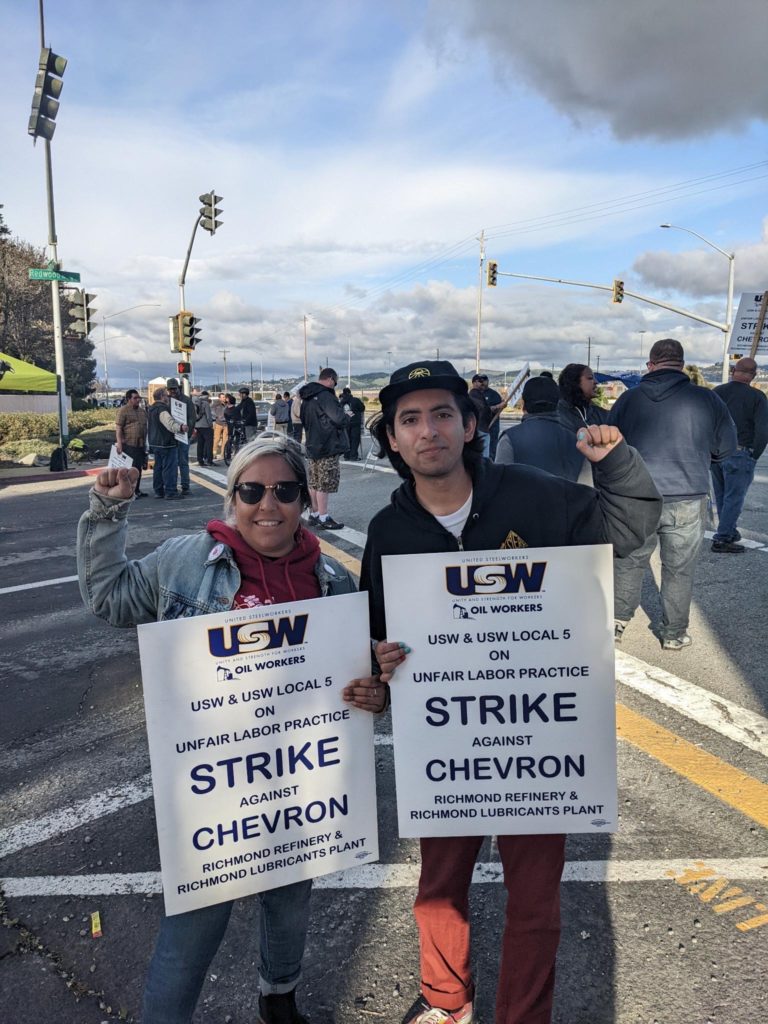 Angle: Chevron provides about 25-26% of the city budget [through tax revenue]. We are toxically addicted to Chevron. So there is a lot of fear in the community that Chevron is no longer here.

That’s where we—the Richmond Listening Project—come into the picture and start conversations with people about a future beyond Chevron.

Our goal for the project is to amplify the stories and voices of the communities most affected by fossil fuel operations here in Richmond. I was thrilled to discover in these conversations that ordinary people have a vision for Richmond beyond Chevron. It is a community where we have clean air, clean water, clean land, and where our economy is regenerative and not based on fossil fuel extraction.

Ramos: The 2012 fire was one of those “enough is enough” moments. Several environmental organizations have come together to form a coalition.

We have created a network of mutual aid; we developed a cooperatively owned business incubator; there are cooperative buildings for housing, so people can afford to stay here.

The community transformed what used to be a dump into Unity Park. Lots of community events take place here. Rich City Rides, [a nonprofit that promotes cycling as a green mode of transportation]there begins our Sunday outings Self-service.

In North Richmond, you have Urban Tilth, which produces hundreds of pounds of fresh, organic, hyperlocally grown food that goes to a community that doesn’t normally have access to these types of foods.

The people who lived here wanted more than just to fight this refinery, but to create the future they envisioned.

Khan Souvong: I started going to APEN [Asian Pacific Environmental Network] meetings with my mom. My mom always says she fled the war to find a better life, but the pollution here brings its own challenges. Being part of the network meant a lot to me. We were able to share our experiences with others [frontline] commonwealth. Sometimes we cry – it can be emotional.

Angle: After the fire, the Richmond Progressive Alliance came together to take political power away from Chevron and put that decision-making power back in the hands of the community. We have a progressive majority on the city council and have been able to pass a lot of green policies. We banned the shipping of coal in Richmond and passed a progressive corporate income tax.

I think the 2012 fire played a big role in creating a generation of young people who are angry and look at the status quo and say, “Enough is enough.” We are a generation that has never lived in a world without a climate crisis, and we are starting to find out that we don’t have time for idleness.

This article was made possible by a grant from the Open Society Foundations. Nexus Media News is an editorially independent non-profit climate change news service. Follow us @NexusMediaNews.

Images and photos via Nexus Media and are either in the public domain or freely available for publication by their authors.