Heart attack and stroke patients calling for an ambulance are being told it could take hours before they are seen – as the NHS battles its worst crisis of the summer.

West Midlands Ambulance Service warned it was ‘under huge pressure’ and category 2 callers could wait ‘hours’.

An update to acceptable mobile controls may be met with ‘difficult conversations’ with people needing help with it, adding that ‘help will be available’ to staff.

Later tonight, a BBC investigation will show how ambulances are being forced to park for up to 20 hours outside hospitals waiting to hand off patients.

NHS guidance says paramedics should be able to hand over patients within 15 minutes of arriving at A&E.

The NHS is being hit by Covid, staff absences and over-admissions caused by the heatwave, with emergency departments busier than they have ever been at this time of year. 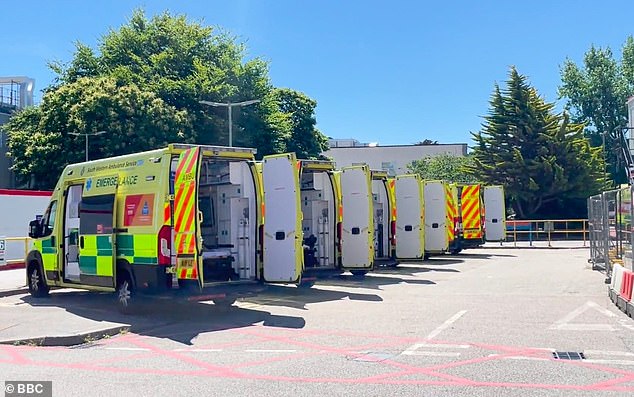 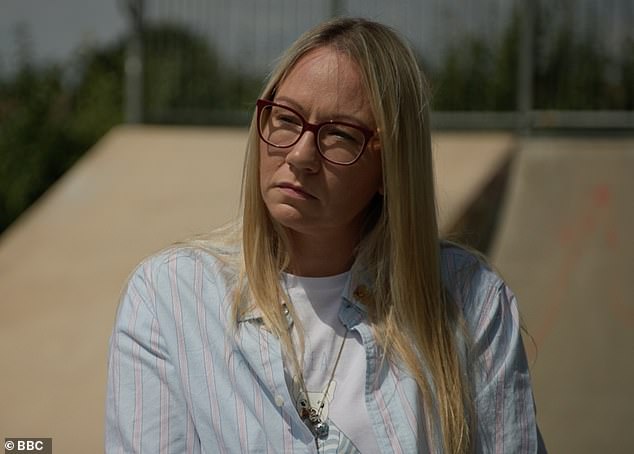 Ambulance delays in handing over patients is one of the reasons for health workers taking a long time to arrive at an emergency. Naomi Rees-Issitt’s (pictured) son Jamie died of a heart attack while waiting more than 17 minutes for an ambulance which according to NHS targets should have been there by nine. 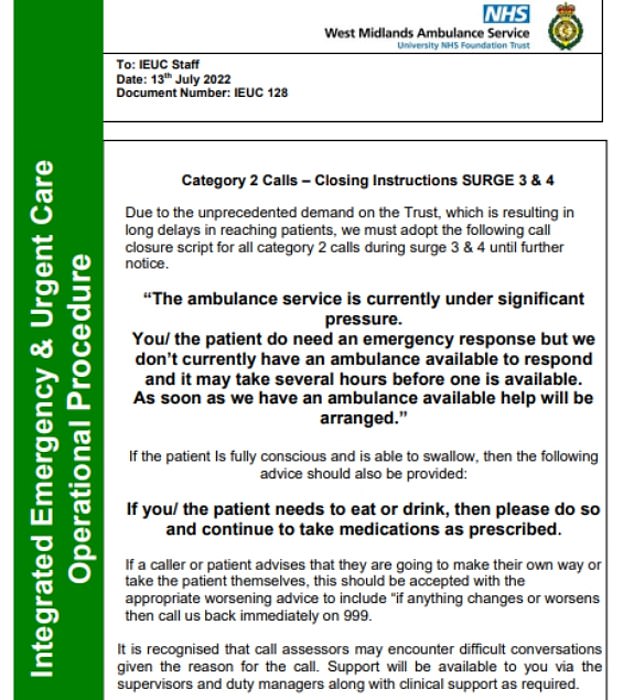 Just this week West Midlands Ambulance Service advised 999 operators to tell the public it could take ‘several hours’ for staff to attend the second batch of calls which include heart attacks and strokes. The NHS target for these events is 18 minutes

These patients waited more than 50 minutes for an ambulance on average in June – despite the NHS target for these types of emergencies being 18 minutes or less.

Earlier this week, ambulance services across the UK were put on ‘black’ alert amid the escalating crisis, signaling they are under ‘extreme pressure’.

Ambulance bosses have urged sick Britons to only call 999 in life-threatening situations and to stop calling paramedics.

BBC Newsnight found one ambulance at Derriford Hospital in Plymouth had to wait 11 hours before unloading.

The NHS is on track to have its busiest season on record with poor outcomes for patients as it struggles with a surge in Covid, hot weather and a wave of staff absences, the latest official data shows.

Heart attack patients waited more than 50 minutes for an ambulance on average in England last month – almost three times the NHS target – and more than 22,000 Britons queued for 12 hours longer in A&E before being seen.

Calls for more urgent cases have also increased by a third in recent months, with the average patient with a life-threatening condition now waiting nine minutes for paramedics, compared to a target of seven minutes.

Ambulance services across the UK this week were put on ‘black’ alert amid the growing crisis, signaling they are under ‘extreme pressure’, and faith bosses have told sick Britons to only call 999 if their condition is life-threatening and to stop calling. where is their ambulance

One in four nurses say they have witnessed patients being treated in corridors and waiting areas in recent months, leaving them at risk of poor care.

Dr Sarah Scobie, from the Nuffield Trust think-tank, said the latest figures ‘show how emergency care within the NHS is struggling and how this is putting patients with urgent and life-threatening needs at risk.’

At one point there were 20 ambulances waiting to hand off patients outside the hospital, with vehicles forced into the overflowing parking lot.

Similar waits of 10 hours were observed by BBC researchers at the Royal Cornwall Hospital, with delays of up to three hours at the Royal Shrewsbury and Heartlands in Birmingham.

Paramedics saw waits of more than 16 hours at Worcestershire Royal, more than 18 hours at Heartlands, and more than 20 hours at Shrewsbury Royal hospitals.

One of the paramedics, who spoke anonymously to Newsnight, spoke of the emotional impact of arriving later than expected in an emergency.

‘It would be wrong to say that there are times when I have not shed tears,’ they said.

“There are certainly instances that I’ve been in where we should have been at them earlier and less harm would have come to them.”

Now there have been many cases of the British trying too hard to save people while waiting for an ambulance that arrives late.

Naomi Rees-Issitt, from Warwickshire, revealed that her son Jamie died of a heart attack after an ambulance was delayed in January.

Jamie was 18 when his heart stopped.

As the first team, the NHS had to have ambulance crews on the scene within seven minutes.

But it was 17 minutes and 30 seconds before it arrived.

At the time of Jaime’s call for help, 17 of the 32 ambulances in their area were already on their way to the hospital or were waiting outside to deliver patients.

Six of these ambulances were waiting at the hospital for more than an hour.

Ms Rees-Issitt was due to meet former Health Secretary Sajid Javid to discuss ambulance response times, but this was canceled after she resigned shortly before the Conservative leadership race.

“We’re back to square one because Sajid Javid resigned,” he told Newsnight.

‘It’s really annoying after working for the last six months trying to organize this meeting.’

A spokesman for The West Midlands Ambulance service told Newsnight: ‘A further inquest report will also be sent to Jamie’s family once it has been completed.’

The latest NHS data shows that the number of emergency patients like Jamie has risen by a third in recent months, with the average first-line patient waiting nine minutes for paramedics, compared to the target of seven minutes. 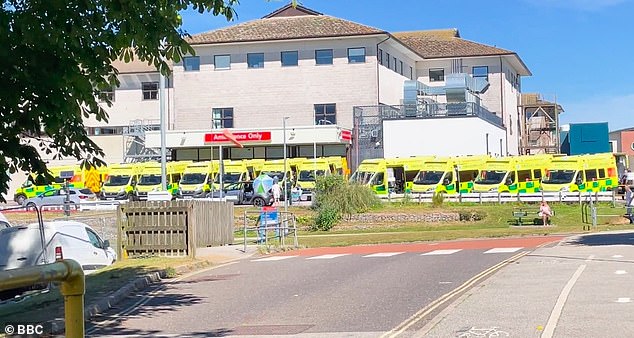 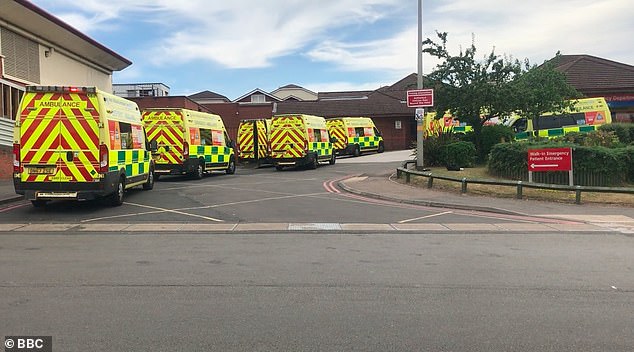 BBC researchers visited six hospitals in England to look at the handover of patients, including this one at Heartlands in Birmingham

Adrian Boyle, President-Elect of the Royal College of Emergency Medicine, told the program that the problem was caused by hospitals not being able to release tens of thousands of patients recovering in community care.

“The emergency corridor is often full anyway,” he said.

“What’s even better is if we can get patients out of the hospital, make that space so we can open up our emergency departments and allow hand ambulances to hand off their patients seamlessly.”

A spokesperson for the Department of Health and Social Care said the Government had updated hospital discharge guidance for NHS and local authorities to ‘ensure equitable discharge across the health and social care sector’.

The latest A&E figures also show the pressure the NHS is under with more than 22,000 Britons queuing for more than 12 hours at A&E before being seen in June.

Monthly health care performance data showed the crisis in emergency departments as doctors grappled with rising levels of Covid patients and staff, over-admissions caused by the heat wave and a backlash from the pandemic.

Meanwhile, the NHS backlog for routine ops grew from 6.4 million to 6.6 million in May, the most recent month with data, meaning one in eight people in England are now waiting for elective care, often in pain.

The number of people waiting more than a year has also risen to 331,000 and more than 8,000 couriers have been waiting for more than two years – despite the Government’s promise to scrap the two-year wait at the end of this month.

Newsnight will be broadcast on BBC Two tonight at 10.30pm.